Below is a picture of a typical Wirepas Massive system where the key components are:

In this documents we will describe the system which can be organized into three parts:

From a system point of view, the overall software architecture is the same in both the Single and Dual MCU architectures as they both contain the Wirepas Massive stack plus the Application.

The Wirepas Massive stack is provided as a binary and includes all the components related to:

The Application sits on top of the Massive stack, has access to the peripherals using its own HAL, and is scheduled by the WM Scheduler 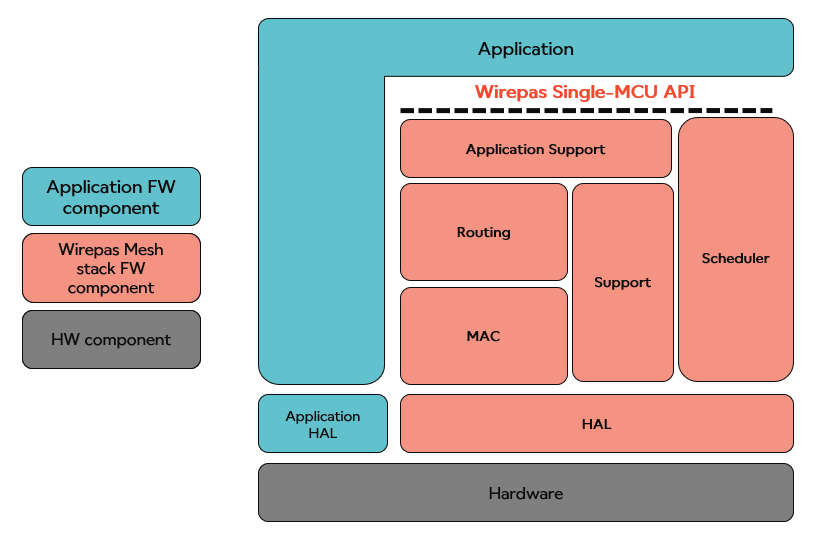 A bootloader is provided together with the Wirepas Massive stack. The bootloader is responsible for bootstrapping and update management during the Over the Air Update process (OTAP). More information about the bootloader is available in the following documents [2]

The flash memory is organized in different areas as per the picture below: 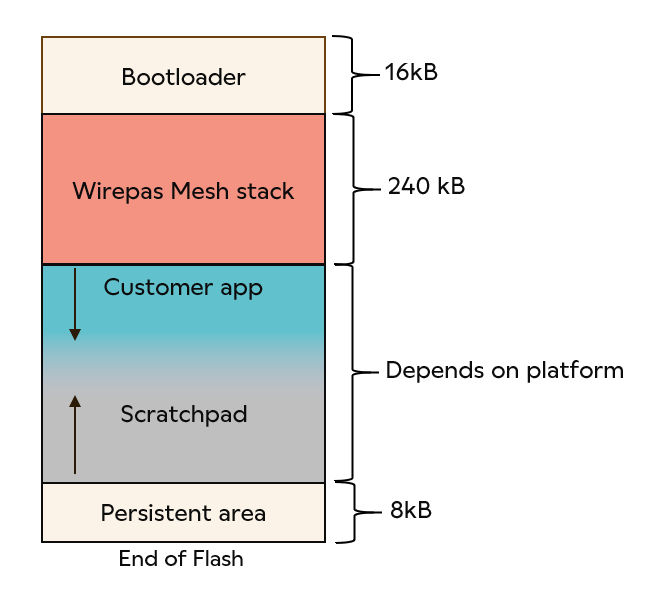 The mapping of the different areas is defined by Wirepas. The Customer application seats after the Wirepas Massive stack. The available memory for the application depends on two things:

More information about the supported Radio IC’s can be found in the Wirepas Massive stack Release note corresponding to the stack used [9]. 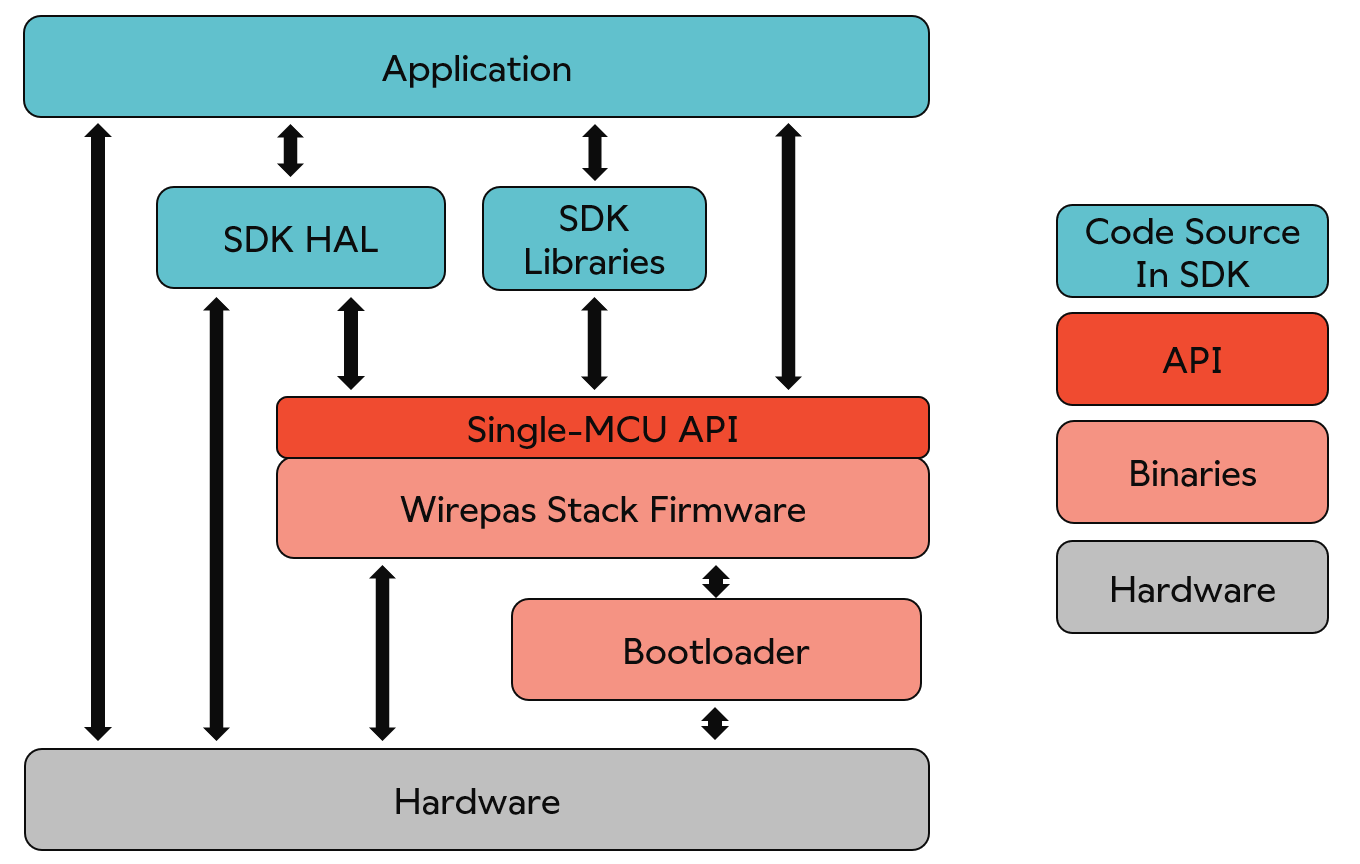 The Single-MCU API is defined as the API between the Wirepas Stack and the application.

The Single-MCU API consists of libraries, each dedicated for a specific use, such as data handling or time services. The API is kept backward compatible. This enables an old application to operate with a newer stack firmware.

The Single-MCU API is fully open source and is documented as part of the SDK that is available in GitHub [3].

The SDK enables the developer to build applications that run on the same MCU as the Wirepas stack. The SDK is provided as an open-source component. Wirepas provides a single SDK for all MCU and boards supported by Wirepas where the developer can easily add a new board corresponding to their product.

The SDK has minimal dependencies to adapt to multiple development environments. It can be used on different OSs and can be integrated with multiple IDE.

The API is fully documented in [4] and offers:

The Dual-MCU API implements a subset of the Single-MCU API. 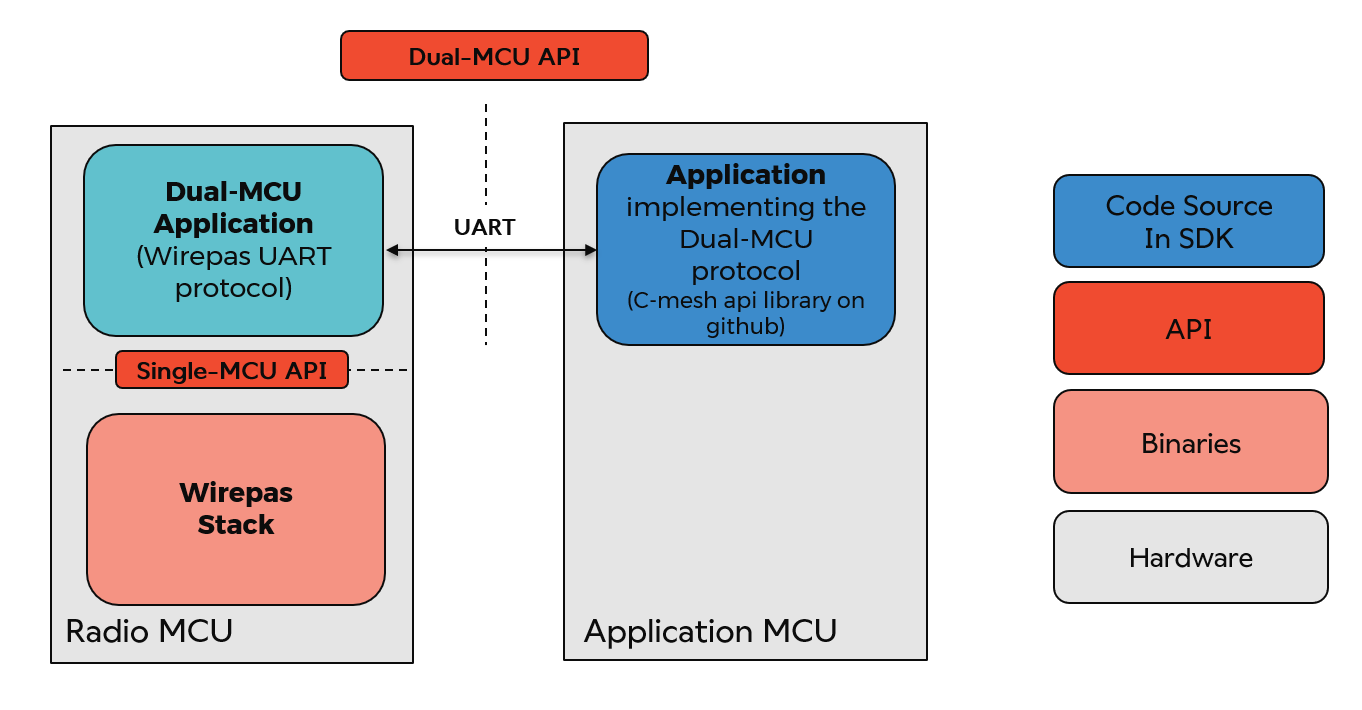 Wirepas also provides the C-Mesh API library which is an implementation example of the Dual-MCU API in the Application MCU. The C-Mesh API is a wrapper on top of Dual-MCU API, coded in C language.

For example, the Remote API can be used to:

The Wirepas Gateway operates on Linux operating system. The gateway contains different components that can be adapted to the end-user needs. The modular approach combining some parts coded in C and some others in Python allows supporting multiple configurations. Below is a block diagram of the Wirepas Gateway.

Note: the main benefit of D-Bus is to have a logical bus. It allows having several Sink Services and Transport Services running in parallel in the same machine. The d-bus allows adapting the application requirements both on the local Wirepas Network side and on the Cloud side.

The Wirepas Gateway is available both as a native delivery with Sink Service and Python wheel or as a Docker implementation.

The Wirepas gateway to Cloud API offers a complete API to manage the Data flow with Wirepas Massive network as well as the configuration and different services offered by Wirepas Massive (e.g. OTAP)

This API relies on the MQTT protocol to connect all gateways to a backend service which can be either a Wirepas backend or a custom backend running either in the cloud or on an on-premise server.

Wirepas also provide additional tools on the cloud/server side. Two of them are highlighted below:

The Wirepas Backend is a reference implementation of WNT and WPE backend running on a Linux Server. It implements on one side the Wirepas Gateway to Cloud API over MQTT/protobuf and on the other a set of APIs for WNT Client and Positioning.

The API is documented in [7] and can be used to connect the end-user IoT platform to it. Wirepas Positioning data is also available from this API.

NOTE: Wirepas Network Tool does not process the actual application data from the mesh network, as a consequence user data is not available from the WNT API.

Wirepas Positioning Engine API is dedicated to positioning. With the WPE API, it is possible to configure and receive processed data from the positioning solver. The WPE API is described in the WPE documentation.

Note: When the WPE and WNT are integrated together, it is recommended to use the WNT APIs to get both the configuration and the positions.

Here is a summary of the various APIs offered by Wirepas on the complete system which have been covered in this document. 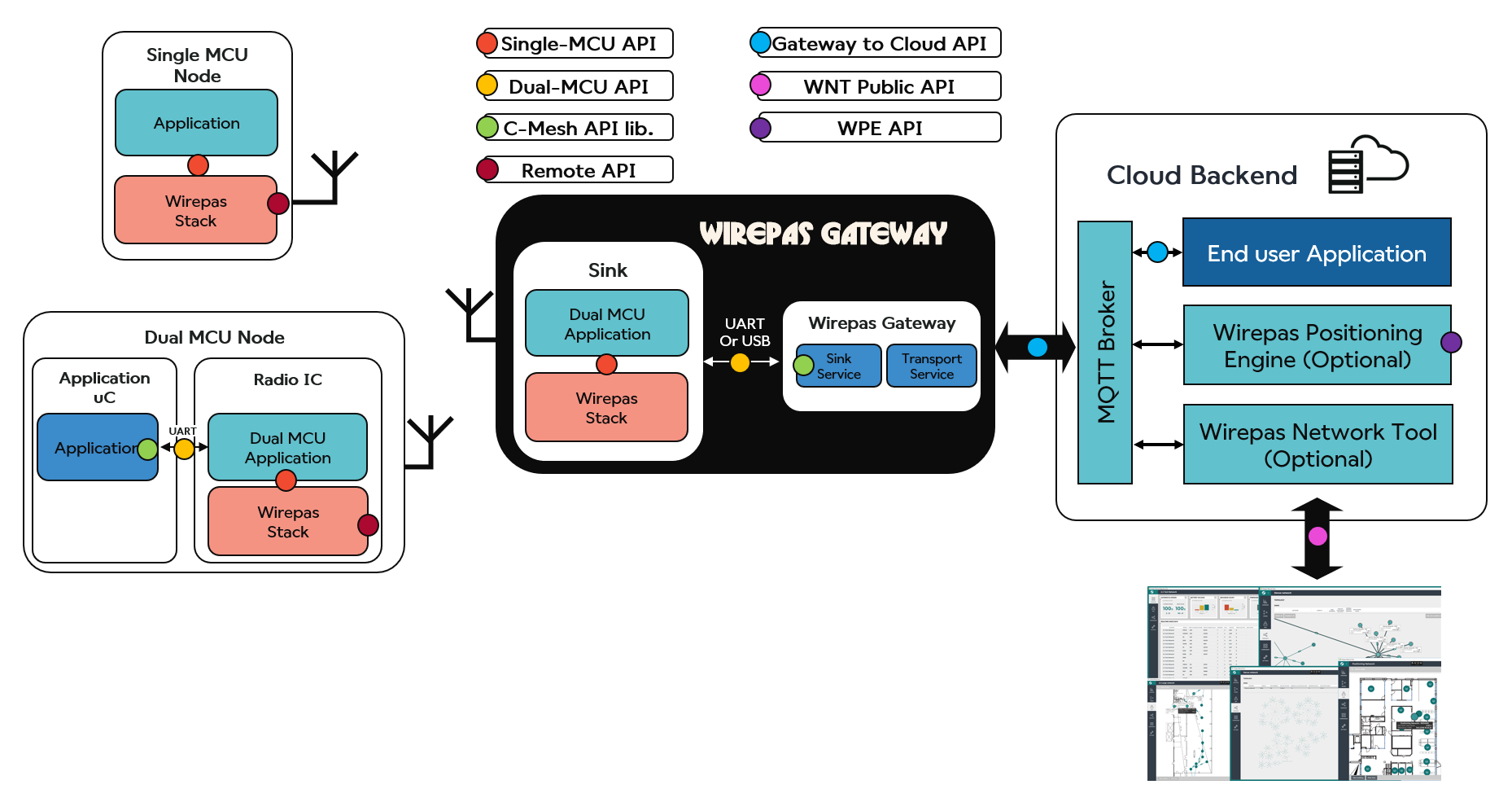 The next table summarize where to find the API & Libraries description and the associated documentation: