As described in the Wirepas Massive Concept document [1] different parameters are available in Wirepas Massive to ensure device identity and network isolation. For obvious security reasons devices are usually provisioned to belong to a given network to ensure proper device isolation and security. This way a node installed or flashed with different parameters won’t be able to join an existing network.

For most use cases network parameter configuration during production is not an option as the device manufacturer is not the network owner and manager. In addition, customization during manufacturing can add a lot of unnecessary complexity to the supply chain.

This document describes the different strategies available for device provisioning in a typical Wirepas Massive network. Two strategies are described:

This provisioning uses the Wirepas Open Joining feature to provision new devices via the existing and secured Wirepas Massive network. In a nutshell, the Wirepas Open Joining allows a new node (called the “Joining Node”) to establish a peer-to-peer communication with an already provisioned and connected node (called a “Proxy Node”). This peer-to-peer communication only allows a Joining Node to communicate with an existing node without any interaction with the rest of the network. Both the Joining Node and the Proxy Node are then running a provisioning library that defines the protocol to make a joining request and in return securely receive the network parameters.

This provisioning method allows for a zero interaction installation, which makes the device provisioning fully transparent and automatic to the installer.

The diagram below describes the typical provisioning flow between a provisioned network and a Joining node. 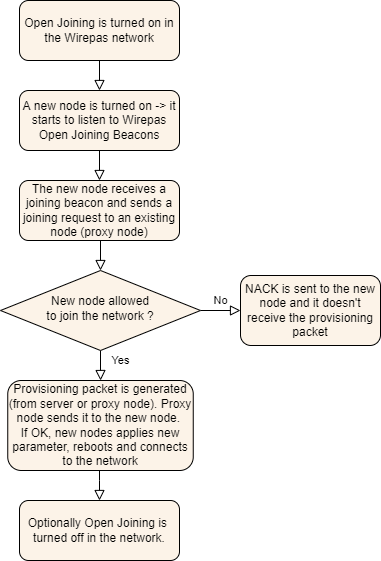 The next sections describe the Remote and Local provisioning.

In Remote Provisioning, the joining request from a Joining Node flows to a gateway and thus to the backend. The Proxy Nodes in the network simply relay the joining messages but they do not do anything with them. It is then decided at the gateway/backend/application if a certain device is allowed to join the network or not.

The diagram below describes the Remote Provisioning flow assuming the Open Joining has been previously enabled in the networks. 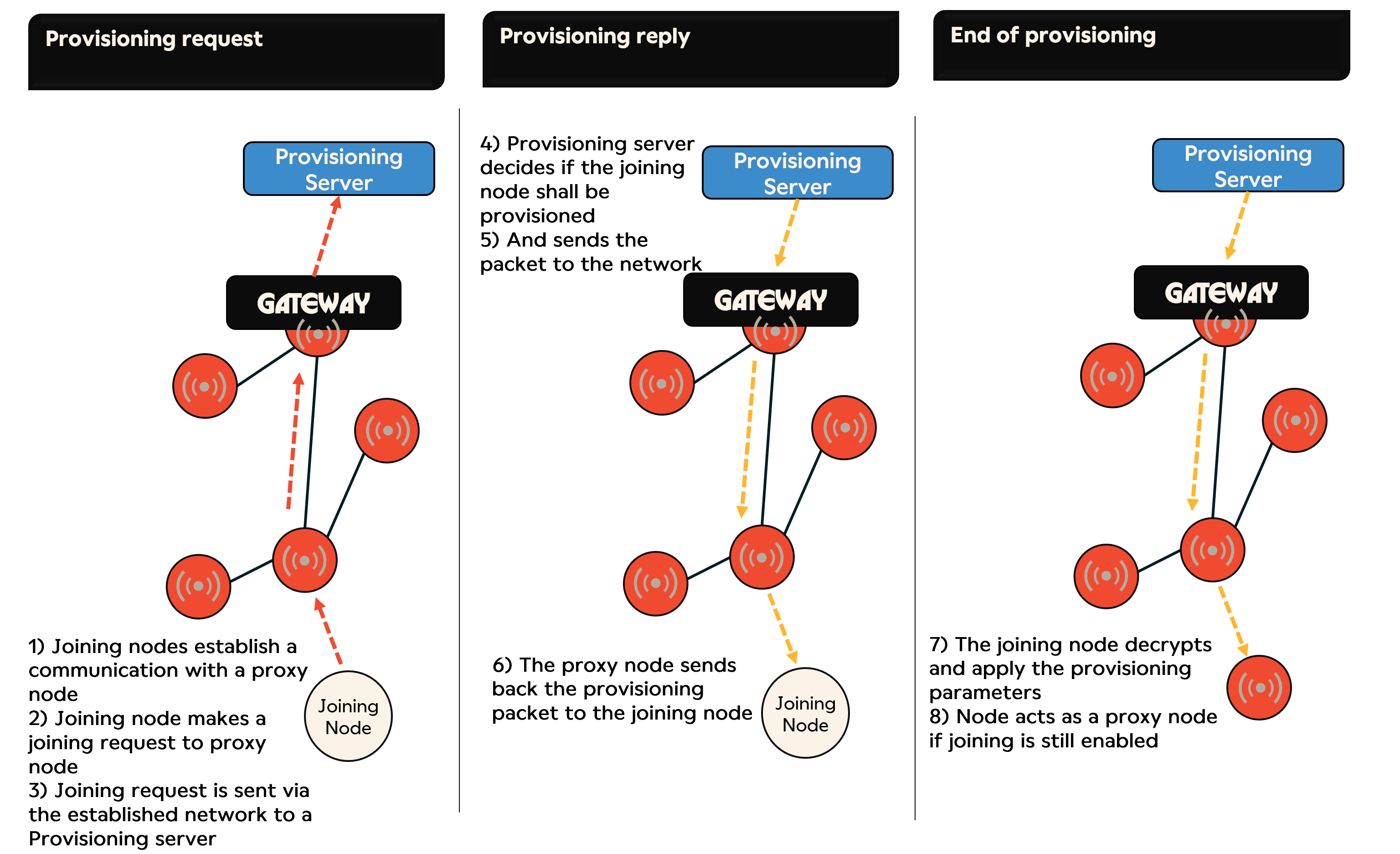 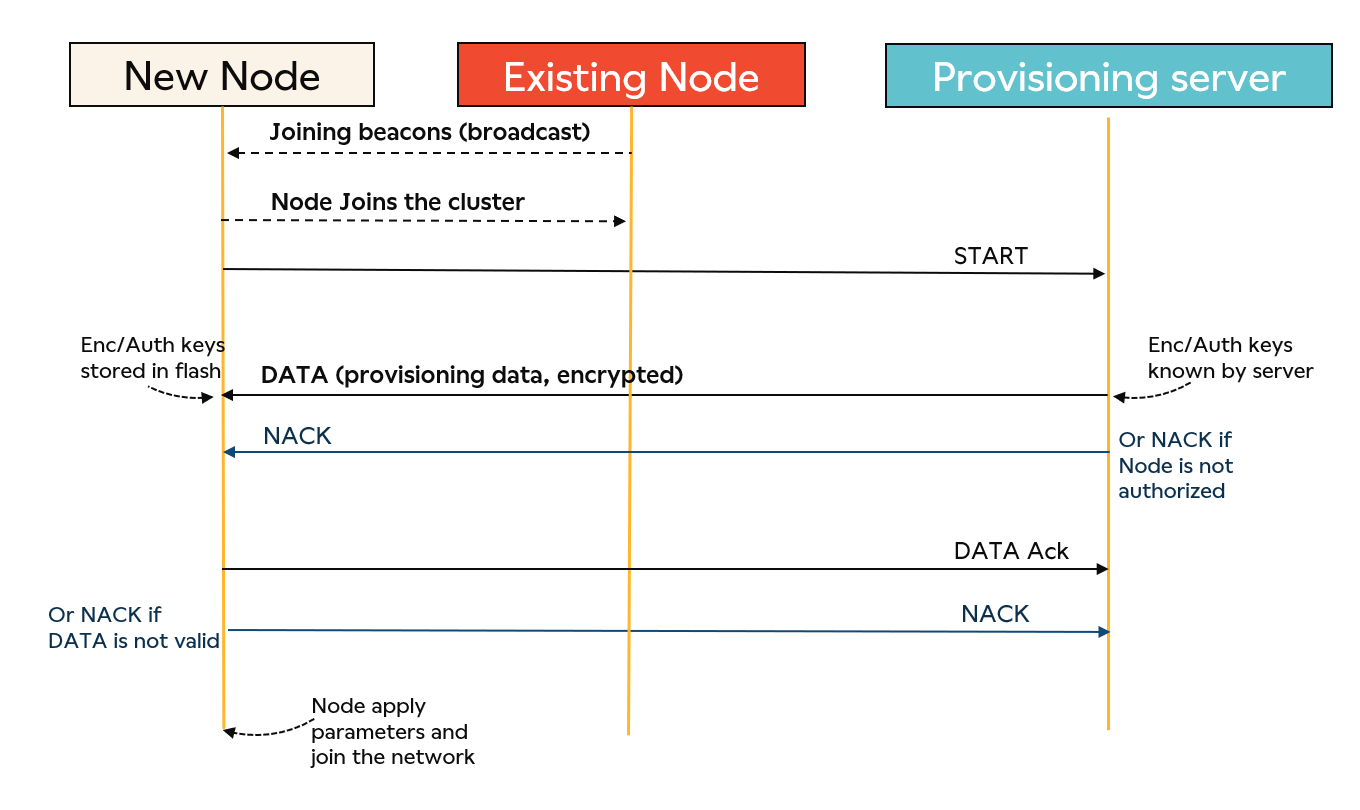 When the backend receives the START message it must decide if this certain node can join the network. The decision can be based on the address of the device or some other parameter. The start packet may include some application-specific data. The backend then responses to the network with NACK (if the device is not allowed to join) or a DATA packet that includes the network (and optionally application) parameters (when allowed to join).

Because all decisions related to a joining request are handled in the backend, the Remote Provisioning solution is well suited for:

The Remote Provisioning requires the following points of attention:

NOTE: The Local Provisioning is only supported in Wirepas Massive v5.2 and above.

Local Provisioning is controlled using shared AppConfig data used to enable/disable and configure the provisioning. Any node being a router or a sink can act as a proxy node (Sinks are configured via the dual MCU API).The exception here are Subnodes (aka non-router nodes) which can’t act as Proxy Nodes. 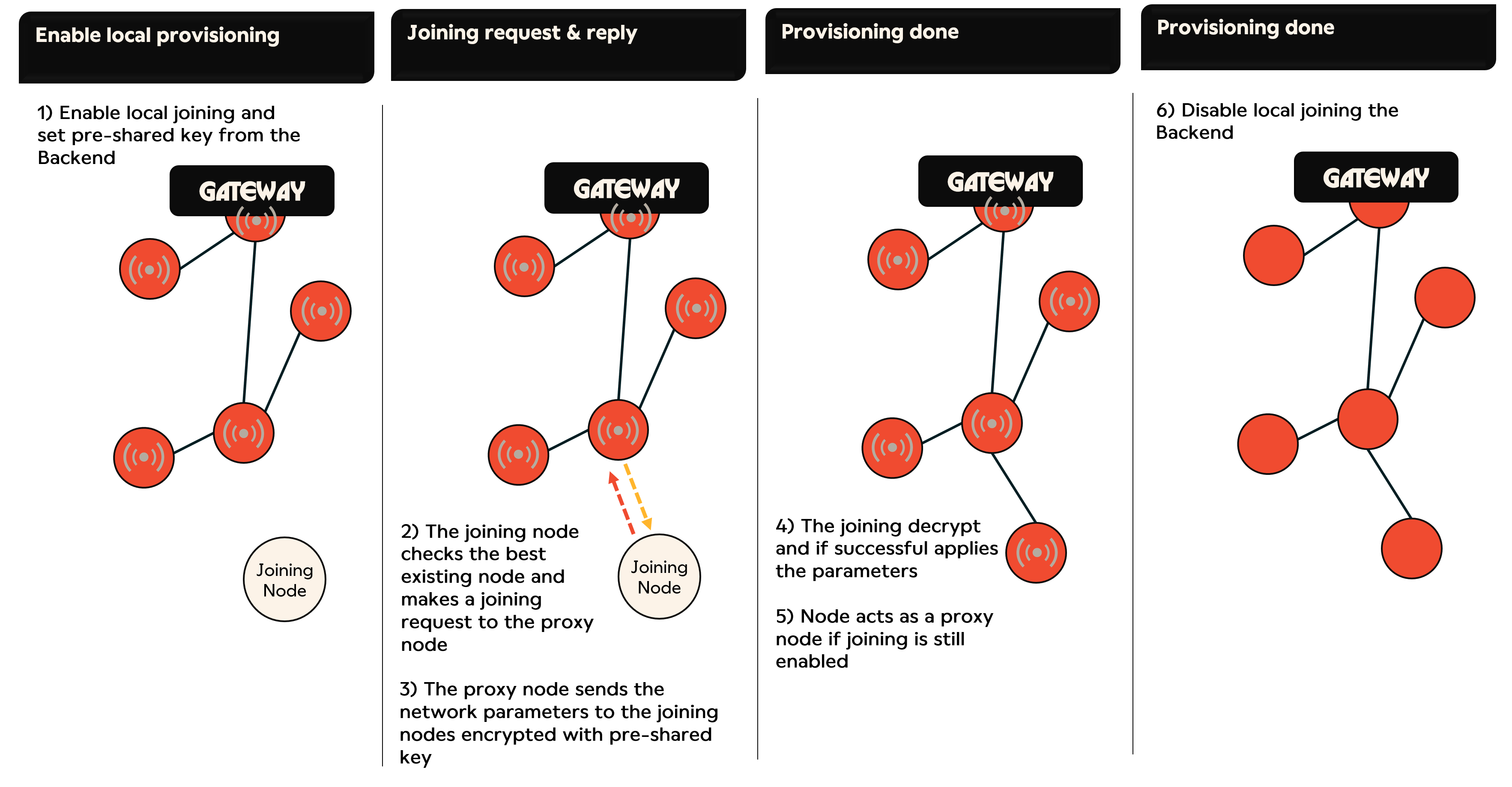 Because all decisions related to a joining request are locally managed the Local Provisioning solution is well suited for:

Out-of-Band provisioning relies on an external link between a provisioning device and a Joining Node. In this scenario, the device is typically using another interface (e.g. NFC) to receive its parameters from another device (e.g from a mobile phone or from a PC). 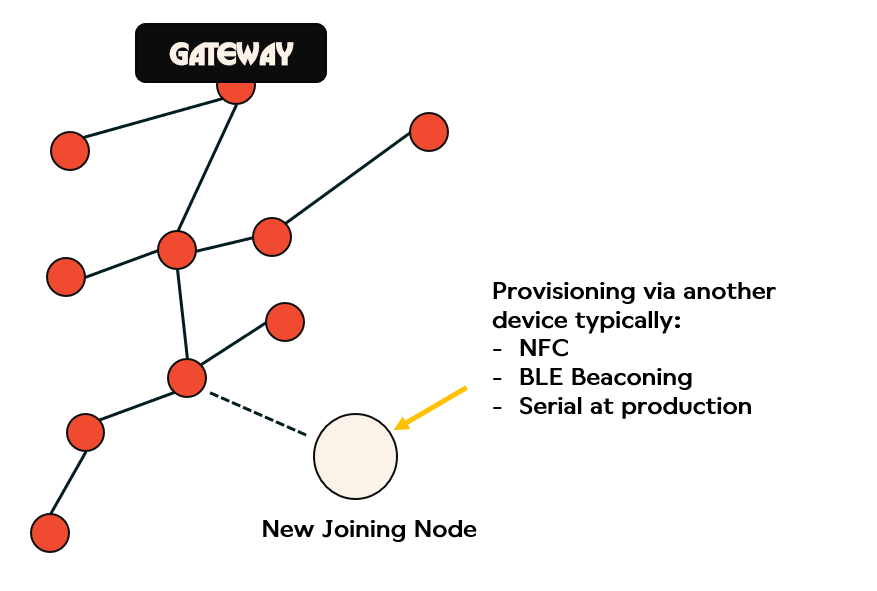