Wirepas Massive SDK and deliverables support multiple product configurations to allow to develop different product architectures. Typically a device running Wirepas Massive will run the Stack and an Application but other memory components can be added for example for application storage.

The default memory map of a device running Wirepas is presented below: 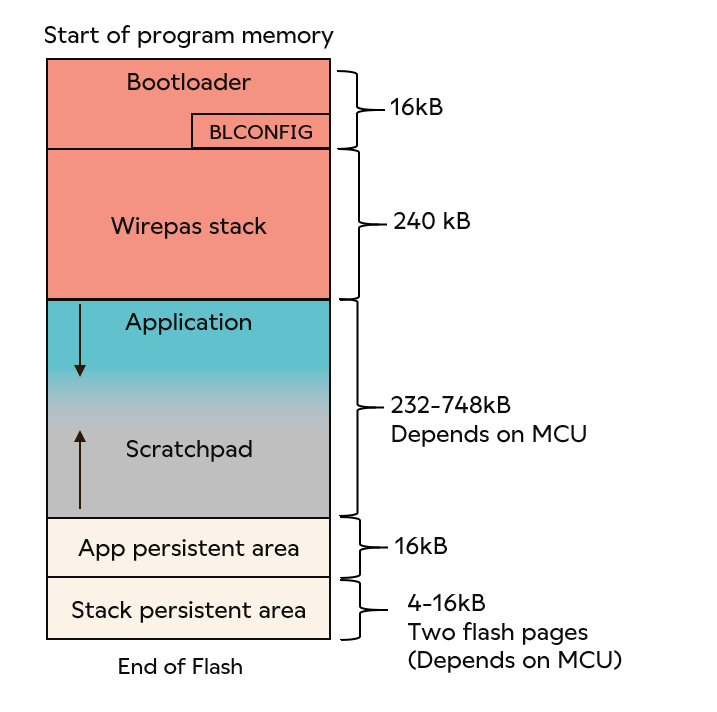 Here is the description of each memory regions:

About application size and scratchpad

Note: In case of an heterogenous network, the nodes having the smallest memory footprint are the limiting one for OTAP. It is highly recommended to ensure that the available smallest scratchpad area still allows to store any scratchpad to ensure proper OTAP.

By default a maximum application size is set in the SDK linker script for the application size (40KB for 512kB SoCs and 256kb for 1MB SoCs). This limit is here more to act as a warning rather than being a hard limit as per the previous explanation related to the Application area partitioning. It is possible to change those limits based on product needs keeping in mind to ensure a coherent flash memory map to ensure scratchpad storage and OTAP in the product.

The bootloader uses the concept of area to manage its memory regions. Instead of having hardcoded addresses in its code to know the location of each component, the bootloader maintains a list of areas that contain this information.

Up to 8 areas can be defined in the bootloader. They are defined and can be modified in the SDK. And they are stored inside the BLCONFIG when the device is flashed. This means that once flashed, it is not possible to modify the area list defined in a device for the lifetime of the product.

Each area defined in the bootloader has the following information:

As an example, the below table describes the default area list for Nordic Semiconductor nRF52832 memory map that was described in the previous chapter :

HW_MAGIC: This is an 8 bit number used to identify the type of micro-controller the stack is running on. It is defined by Wirepas and can’t be modified. This value can be found in cHwMagic field here [5]

STACK_AREA_ID: This is the area ID of the stack, its value is 0x000001xx. xx the lowest 8bits is the HW_MAGIC. Each architecture has a different HW_MAGIC & STACK_AREA_ID so that loading a scratchpad from an incompatible architecture will not cause the stack firmware to get corrupted.

As explained previously, each memory area is identified by a 32-bit ID. The list of areas is stored in the bootloader BLCONFIG. A scratchpad image is a collection of binary files, each of these files being identified by an area id.

Wirepas Bootloader is part of the Wirepas deliverables and is provided together with the Wirepas Massive Stack. The bootloader is responsible for the initial boot and management of the Over The Air Programming (OTAP).

The following chapters will explain how the Bootloader works and how it can be configured. The bootloader can be further customized for some special needs, i.e. external flash support and init functions. Please refer to the ‘Wirepas Massive Bootloader Development Guide' [3] for more information.

What does the bootloader do?

The diagram below describes the typical Bootloader execution flow: 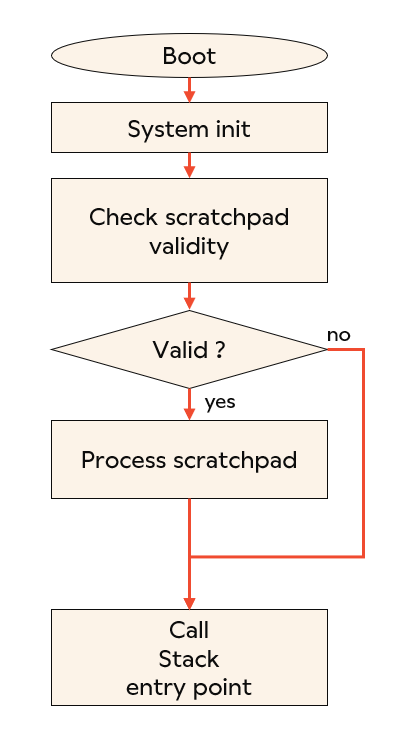 The bootloader is divided into 4 main tasks:

These 4 tasks are further described in the following sections. 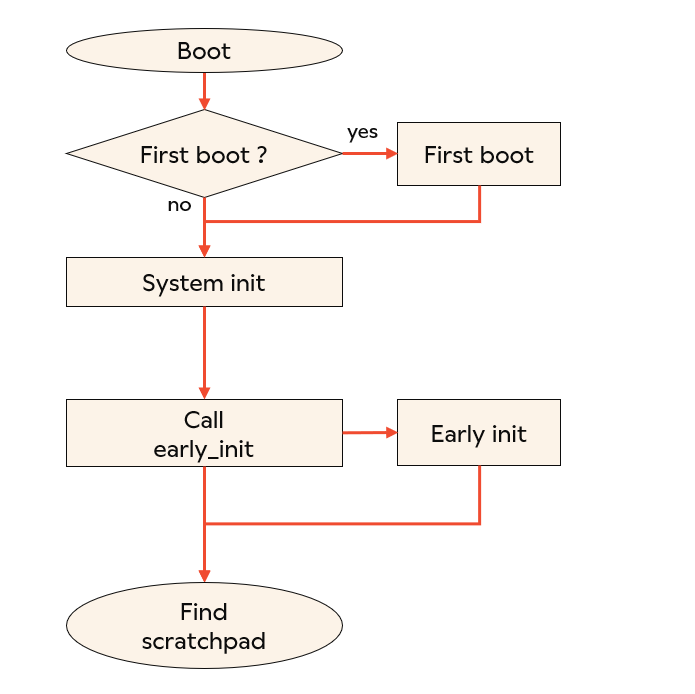 During the System Init, clocks and memory are initialized. It is possible to customize the bootloader to call a function ‘First Boot’ at first boot (before the debug port is locked) and early during the boot sequence ‘Early init’. Please refer to the Wirepas Massive Bootloader Development Guide [3] for more information. 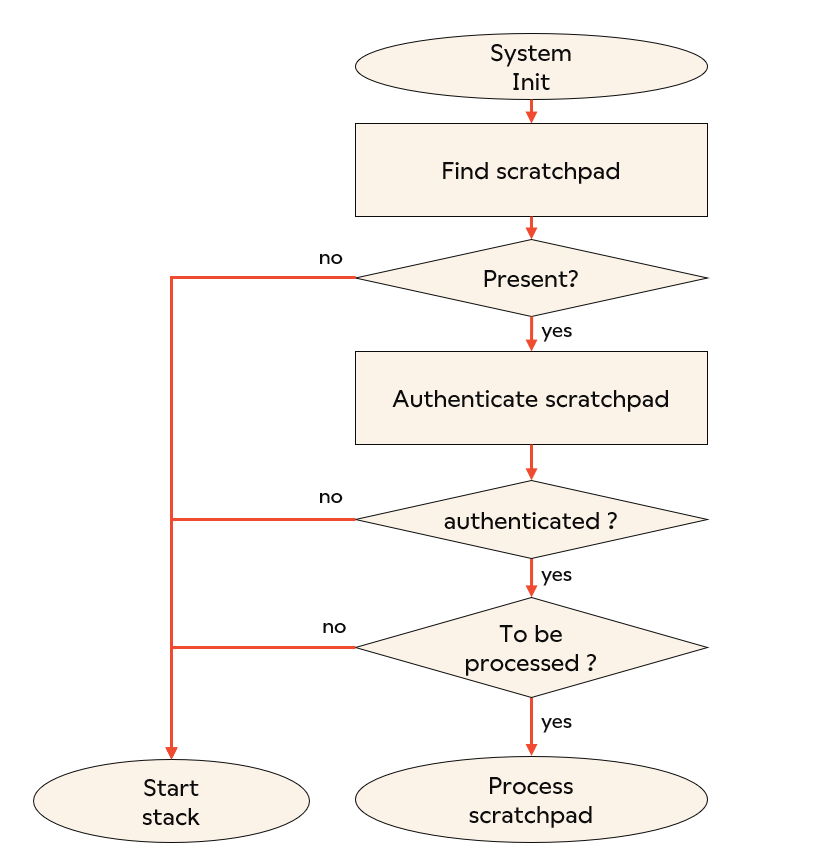 Once the system is initialized, the bootloader will look for the scratchpad in the memory. It can be located in the following places:

If the bootloader fails to authenticate the scratchpad or if none is present, it will start the stack directly. 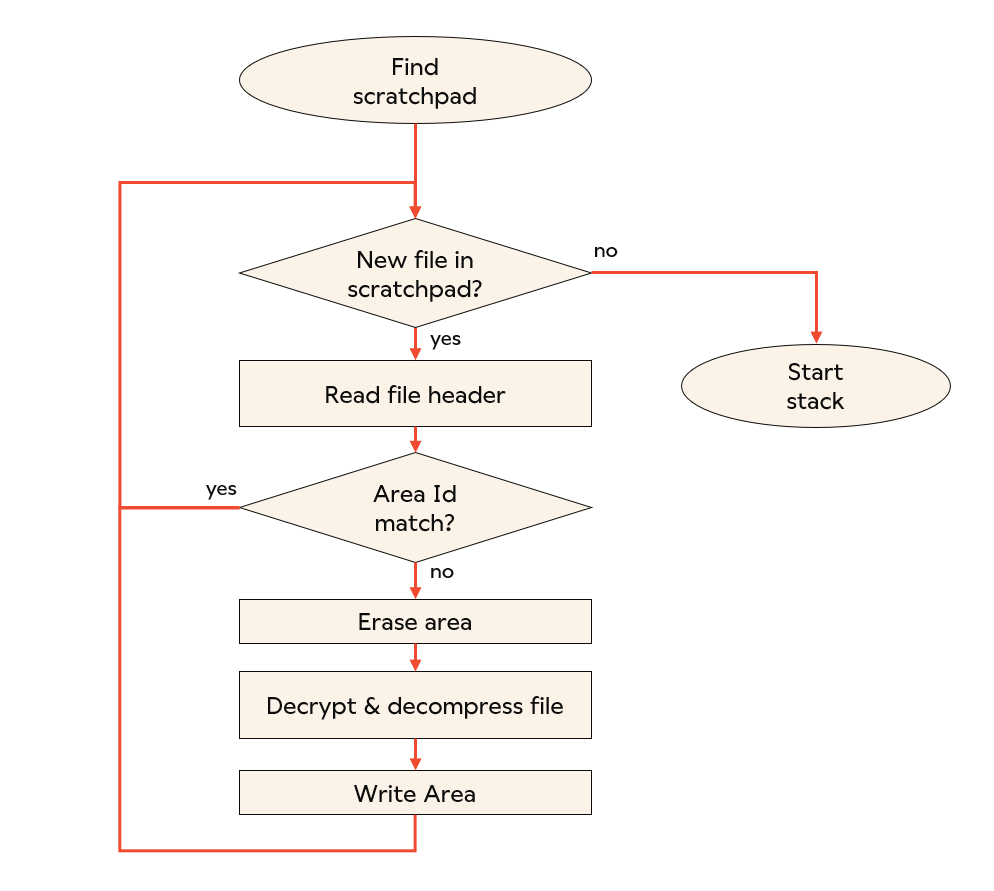 Once the scratchpad image is authenticated, the bootloader possesses the encryption key to decrypt its content.

As the scratchpad is a collection of files, the bootloader will iterate over each one and will try to process them. Each file contains a header with the Area id it is linked to. If the ID of the file matches one of the areas defined in the bootloader, it will process this file. Otherwise, it will skip it and move to the next one.

The following steps are executed to process a file and update an area:

Once all files in the scratchpad have been processed, the update is finished and the bootloader will call the stack entry point.

Customizing the bootloader keys and Areas

At the end of the build process, 3 files are used to generate the BLCONFIG of the bootloader. These files describe the areas and keys for the bootloader:

The built image build/<board_name>/<app_name>/final_image_<app_name>.hex contains the bootloader and its configuration BLCONFIG (+ stack & application). Once the device is flashed, it will be impossible to modify the keys and the areas for the lifetime of the product.

The following sections describe how these files can be modified (or replaced) to fit the application needs.

For some applications it can be useful to have a dedicated memory area to store parameters or configurations. This can be done by defining a User memory area. This area type is only used by the application and can be accessed with the memory area library (see [4] for API description). It can also be updated through OTAP, independently from the application.

The User area is defined by adding a new area to the mcu/<mcu_name>/ini_files/<mcu_name>_app.ini file with the following parameters:

Note: User area in the internal flash is always located between the application area and the persistent area, as these two areas are used by the stack and cannot be moved.

First a Scratchpad area must be declared in the mcu/<mcu_name>/ini_files/<mcu_name>_app.ini file with the following parameters:

Then the scratchpad section must be modified so that its area matches the one defined above:

Figure 4: Define the area where the scratchpad is located

Building with a Custom Scratchpad File

Otherwise, the location of the .ini file can be given to the command line with INI_FILE_APP= when building.

The bootloader can store up to 28 key pairs in its BLCONFIG. A key pair consists of:

Building with a Custom Key File

By default, all applications use the same custom_bootloader_keys.ini file stored at the root of the SDK but it can be copied elsewhere to the application folder and modified as needed. The new key file can be specified from the application config.mk as followed:

Otherwise, the location of the key file can be given to the command line with KEY_FILE= when the application has been built.