This document describes the Wirepas Massive Over-The-Air-Programming (OTAP) feature. It is targeted for developers and users and contains the concepts associated with OTAP as well as the key components.

This document first covers the Wirepas OTAP operation principle. It then describes the key components involved in OTAP operations.

In this chapter, the high-level concepts of Wirepas Massive OTAP are presented.

Wirepas Massive OTAP allows updating the software running in a device via the mesh network. OTAP uses an optimized, secure, and reliable way to spread a new software version to an existing network and to update devices. OTAP can be used to update both user applications and the Wirepas stack.

OTAP Features at a glance

Because a network may consist of multiple devices with different features and as a consequence different firmware, the Wirepas OTAP mechanism relies on 3 main steps:

In order for the OTAP to operate some flash memory must be reserved in each device to store the update image called Scratchpad.

Note: OTAP needs to be done as fast and as efficiently as possible. To allow this, nodes use a special point-to-point communication mode with a high data rate to exchange Scratchpad images. This is why normal network operations are disrupted during the update process. 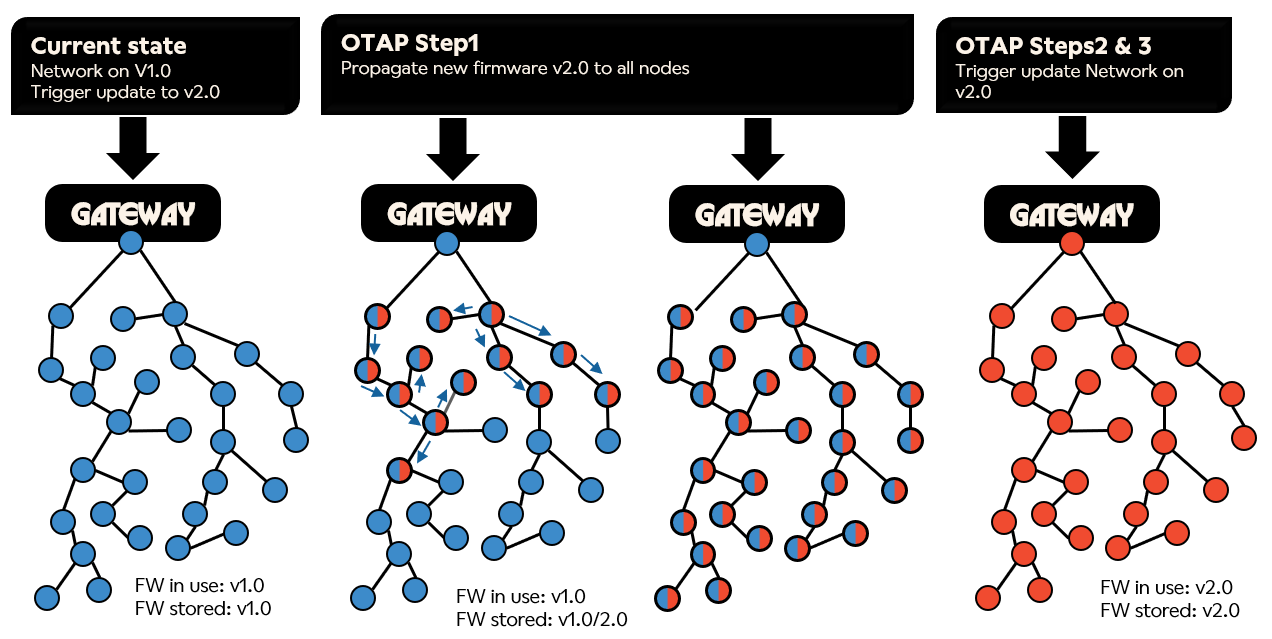 The first step of an OTAP starts by pushing a new Scratchpad to the Sink(s) (the Wirepas device in the Gateway) together with some parameters used to identify a newer version for the network.

Please note that in the below description we use versions e.g. v1.0 & v2.0 to identify newer versions only for a conceptual purpose. Other parameters are used to identify a newer scratchpad and are described in the next chapters. 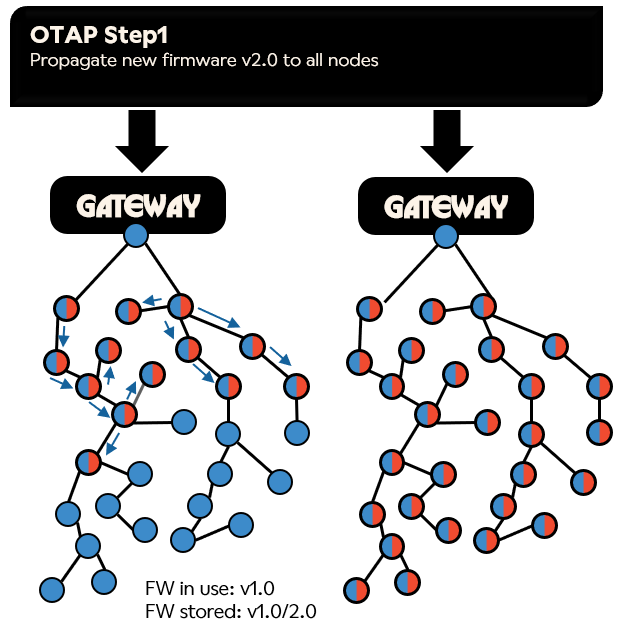 As soon as a newer Scratchpad is seen by a device, this new image is automatically exchanged using an optimized peer-to-peer communication between devices and stored in the device's scratchpad memory (which can be either in internal or external flash).

This mechanism ensures that all devices will receive the new image when the image is present in the network.

At the end of the propagation process, all devices have a running version ie: v1.0 and a stored version ie: v2.0

Note: During this Scratchpad exchange the devices are disconnected from the network.

Note: Even if in most of the cases the update is started from the Sink, any device with a newer version will automatically share his new image hop-by-hop to all devices.

During this phase the Backend (e.g. Wirepas Network Tool(WNT)) is used to:

At the end of this step, all devices have Scratchpad and are ready to process the it.

Step3 - Process and apply the Update

This step is automatically triggered at the end of the Activation Delay set previously and will trigger the following actions: 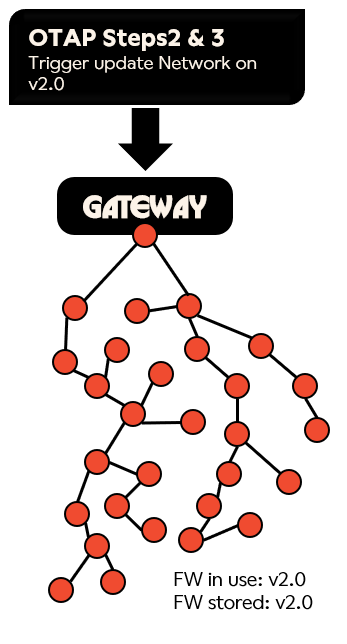 Note: The solution does not include a fallback mechanism.

In addition to the previously described OTAP flow, a fail-safe mechanism is implemented. The fail-safe allows covering potential orphan devices to be updated in case they missed the update commands. For example, mobile devices, that might be outside of the network coverage when the process command is sent, are automatically updated after the safe period.

In this section, the key parameters related to OTAP are described:

An OTAP Scratchpad is binary data that gets copied from one node to another. A scratchpad is a collection of binaries transmitted via the OTAP. Each binary in a scratchpad has (among others) an Identifier to define the targeted component to be updated. This identifier is called AreaID and is a specific software component (a specific area in Flash memory to be accurate).

Area ID can be defined for example as:

The Stack Area is used to store the Wirepas stack. The Area ID is always the same for all devices having the same chipset as the stack is tightly linked to a given chipset. Also, the stack is usually updated on all devices independently of their respective application.

The application Area ID and other User Area ID(s)

Note: AreaID is defined during the device firmware build process. Hence they should be carefully selected as AreaID’s cannot be changed afterward.

In this section, the key components involved during the OTAP process are listed:

The Wirepas stack is responsible to spread a new scratchpad to the network. The Stack has the logic to:

Note: The scratchpad is exchanged using a special peer-to-peer communication protocol between the sender and the receiver allowing a fast exchange of the scratchpad. During this exchange, the nodes are not anymore part of the mesh network. That’s why normal network operations are disrupted during the update process.

There is no local, external interface for the bootloader. All interaction with the bootloader happens via data in program memory.

Wirepas stack supports querying the bootloader status word locally (Single-MCU API [2]) or remotely(Remote API [3]), to see if the bootloader was able to process the scratchpad successfully.

Scratchpad information and version number can be optionally be written in the memory. This is enabled by setting a flag in memory are configuration. This information can be retrieved with scratchpad status or remote status remote API queries.

The Wirepas Gateway drivers are responsible to receive and download a scratchpad to a Sink node via the Dual MCU API.

The Wirepas Gateway to Cloud API over MQTT is used to: