Getting started with Low-latency application Print

This document's purpose is to describe the Low-Latency example application and to explain how to use it.

This “Getting started” document assumes you already have a working Wirepas development environment and that you are able to flash a development board as described in those documents:

Make sure you go through them to set up your system prior to this How-To. A computer running Windows 10 operating system is needed, and a code editor, such as Microsoft Visual Studio Code available here can be useful. It is also possible to build it with a Linux OS, but the steps are not documented.

It helps also to go through “How To set up and use your first Wirepas local network” [4], which explains how to use Wirepas Terminal, how to prepare sinks and nodes, and how to communicate with the network with an evaluation application.

This How-To makes use of widely available reference boards. You need to have at least 5 boards:

Table 1 below gives the boards that are supported. Sink and nodes do not need to have the same radio chipset to be compatible with each other.

USB cables (type A male USB to micro USB) to connect the boards to either a USB power supply or computer.

The application demonstrates some functionalities associated with the Low-Latency mode of operation. Low-latency is a node’s operation mode that intent to maximize communication performance with minimal latencies. It is for example well suited for Lighting application when both local communication and low latency are obviously required.

This application also demonstrate the Adaptive Flooding feature, which consists on sending messages through the radio range independently of the established mesh routes. It is demonstrated for both node to node and downlink communications.

To summarize, this example application demonstrate the following functionalities :

In the next chapter, you will set-up the demonstration in 4 steps :

Then you will be able to communicate with the network either through Wirepas Terminal, or via Wirepas MQTT Library Python script provided.

There is two possibilities to run this application. The simpler is to use only sinks and node and connect the sink to a PC running Wirepas Terminal software as the following picture shows : 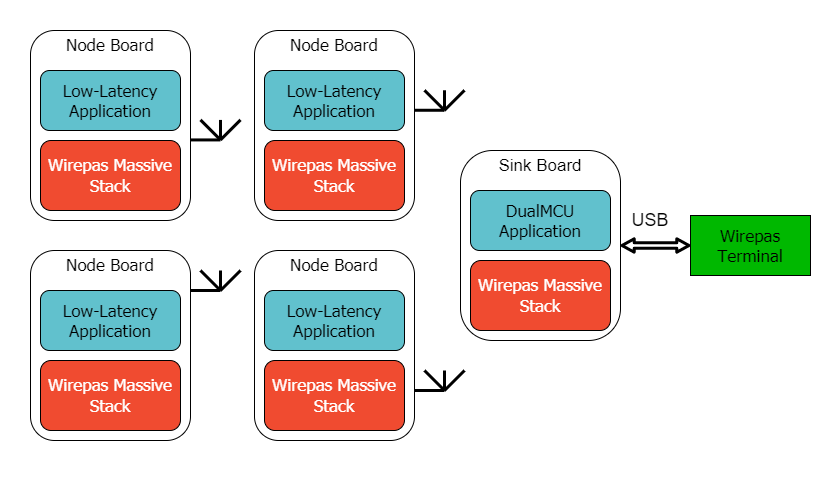 In this case, the communication can be done through the Wirepas terminal, as explained in the “Sending message with Wirepas Terminal” part below.

The second option is to set-up also a Wirepas Gateway, that can be connected to a Backend, or used with a local broker in case you use a Raspberry Pi prebuilt image [6]. 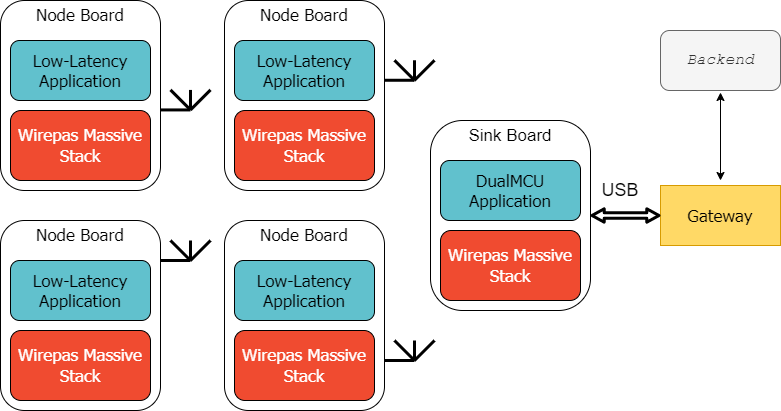 In this case, the script provided in the backend_scripts folder can be used to send messages, as explained in the “Sending message with backend script” part below.

The nodes are connected wirelessly to form a Wirepas massive network. Four nodes are needed to properly demonstrate the multicast feature. The sink board is connected through USB to a PC running Wirepas Terminal. The Low-latency application will be flashed on the nodes, and the Dual-MCU application on the sink board.

The application support the following use cases :

Set up the system step-by-step

The Low-latency example is located in the <sdk install path>/wm-sdk/source/example_apps/low-latency_app folder directory.

The gateway can be configured following the process described in the “How to configure a gateway” [5] document.

Be careful to fill the files gateway.env and sink.env with the same parameters used to build the application : network address, and channel discovery address.

The sink can be flashed with the “dualmcu_app” and configured as explained in the “How To set up and use your first Wirepas local network” [4], step 2.

To build the application use the following command :

Step 4 : Flash the application on the nodes

Once the build is successful, the application can be flashed on a board following the document “How To Flash Wirepas Application” [3] document, step 3. Depending on the board you are using you may use or Simplicity Commander or nrfjprog to flash the nodes with the application.

The following command can be used to flash nrf boards :

To flash a silicon lab board you may use the following commands :

Use the same application path as the previous one but for the correct board name (tbsense2 folder).

Once all your nodes and sink are flashed, you can configure Wirepas Terminal as follow :

Click on “File” → “Open direct connection” and select the COM port corresponding to your Sink. Select also in the field “Device type” the “Custom Device (125000 bps). Then click OK. To check the sink status, click on “Tools” and “Status Report”. The connection must be established as follow : 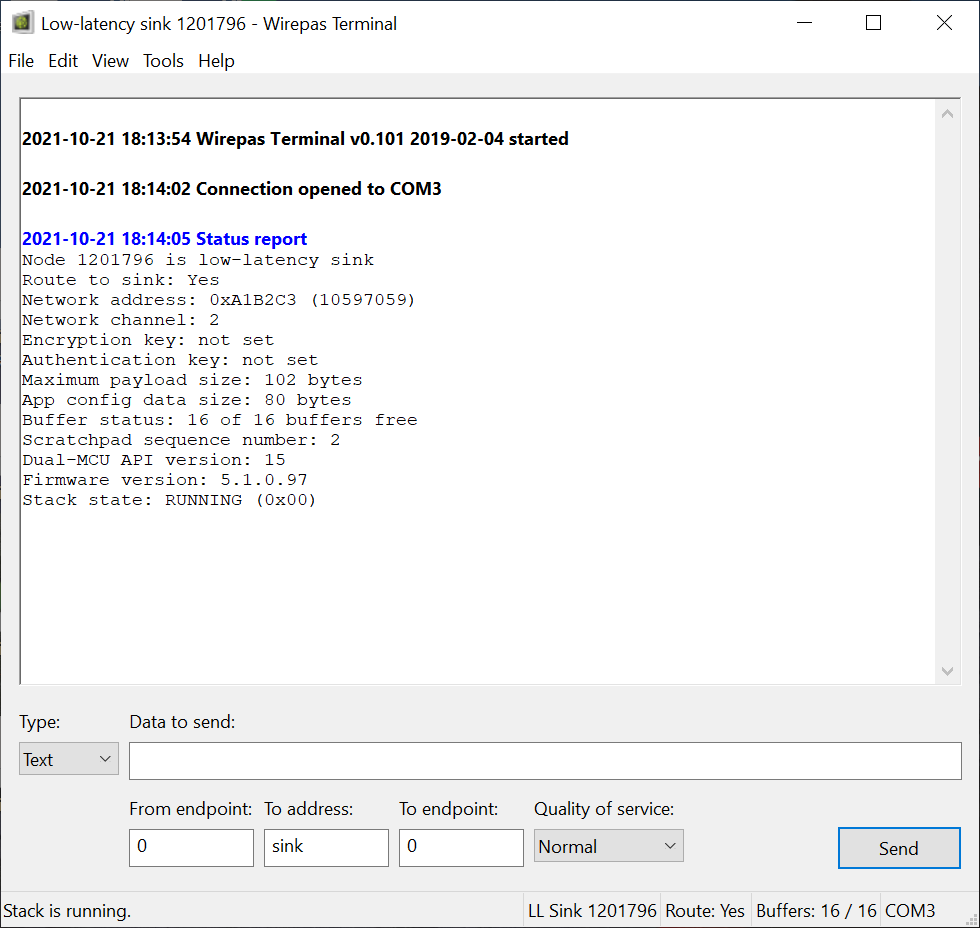 In the same way you can check that your nodes are present in “Tools” and “Neighbor Report”.

How to use the Low Latency example application

The below procedure can be used to demonstrate the functionalities of the low-latency Application :

This message is made to demonstrate the node to node adaptive flooding functionality.

Once a button is pressed on one node (but not the sink), this node will send a message through wireless connection directly to other nodes to switch a led ON or OFF, depending on which button was pressed.

The following diagram shows the repartition of the buttons on both Nordic and Silicon Labs boards and the associated functionalities :

An other switch ON/OFF message can be sent with adaptive flooding downlink from the sink to the nodes, in Unicast (only to one node), Multicast (to some nodes identified by the same group address), or in Broadcast (to all the nodes in the network). This message can be sent using Wirepas Terminal or the backend python script contained in the “backend_scripts” folder. Both of the methods will be presented. 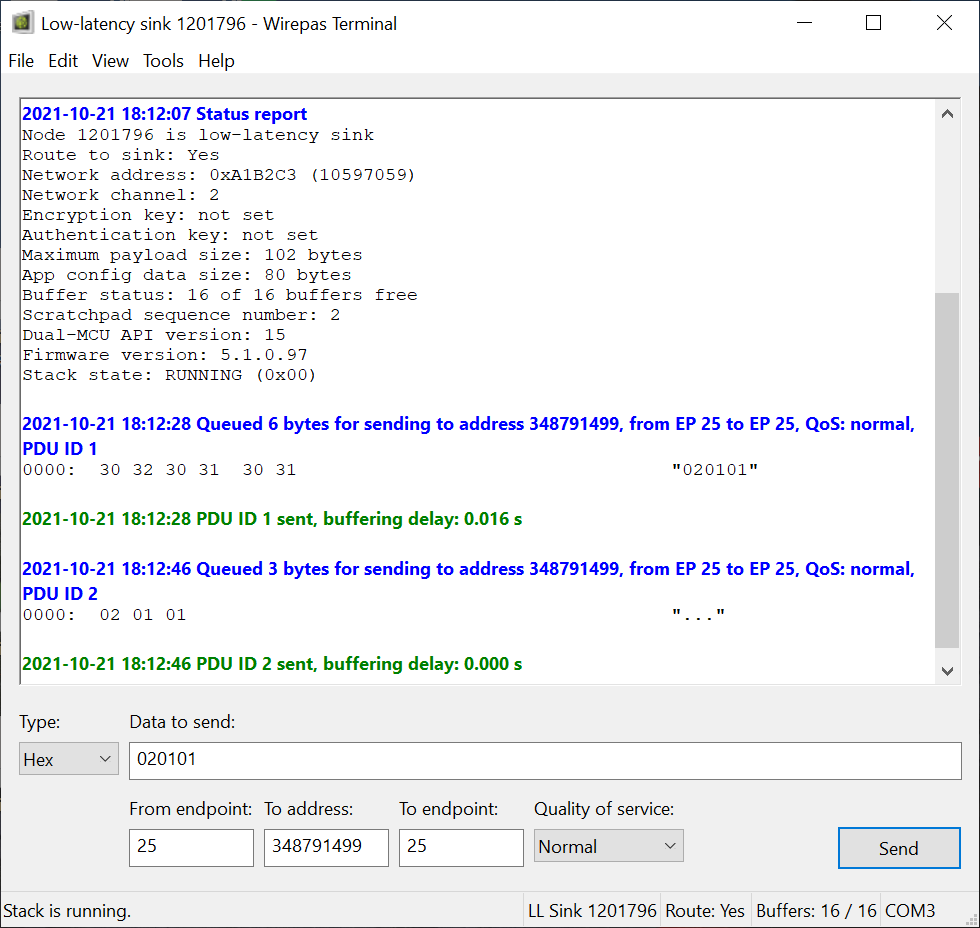 Open a new command window and navigate to the “backend_scripts” folder in the Low_latency application folder.

Launch the “script_lowlatency_app” by typing the following command :

Once the command is properly sent, you must see the following proposals :

“send_led_on_command” and “send_led_off_command” correspond to this downlink message, and can be sent with the following options :

This command will by default set led 1 of the selected node ON or OFF.

The last command that can be received by the low_latency_app is the “grouping” command, which contains a multicast id that will be applied to the node concerned. This means that the node is added to the Multicast group, and will receive the multicast commands.

The same procedure as described for the downlinks messages can be used, with Wirepas terminal. This command can be send in unicast to set a new multicast group for only one node, or in Multicast to change the multicast address for all nodes in the group.

Caution : The multicast address must be send in little endian.

With the backend script, the command is send_multicast_grouping, and can be used as follow :